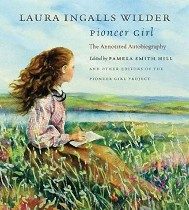 You don’t have to be a historian to appreciate the depth of research that went into Pioneer Girl. The editors have taken Laura Ingalls Wilder’s original handwritten manuscript—the basis for her published books—and presented it unaltered, even down to spelling errors. If you’re familiar with her work, it’s like looking at the underside of a tapestry: all knots, loops of yarn, and reversed colors.

But it’s the extensive, meticulous footnotes illuminating the context that make this edition so riveting. No aspect of the story is too small to merit scrutiny: Alongside the text we find specifics on each person, location, and event mentioned, supplemented by photos and maps. Ever wonder who Nellie Oleson was based on, or what became of Cap Garland? Here are your answers.

Pioneer Girl covers substantial material not included in the final versions of the Little House saga: the death of Wilder’s infant brother, the year when the Ingalls family lived in Iowa, the boarders who shared their home during the Long Winter. And it turns out that the Pa Ingalls we know from fiction is a whitewashed representation. In real life, he packed up his family and snuck out of town in the middle of the night to avoid creditors.

Historical inaccuracies abound, as documented in the notes. But while memory is an imperfect tool for reconstructing the past, it remains the most vivid route. Wilder’s recollections are unequalled in their candor and detail, providing a sharply focused child’s-eye view of life on the American frontier circa 1880.

Countless families lived as the Ingallses did during this period, traveling by covered wagon, building homes and tending crops without benefit of machinery, suffering through blizzard, drought, illness, and financial hardship. Wilder’s story is the exception in just one significant regard.

She wrote it down.