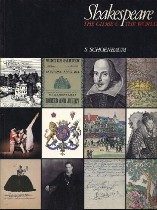 S. Schoenbaum •
Shakespeare: The Globe and the World •

Here’s a chance to hold the famed Globe Theatre in the palm of your hand. This lavishly illustrated book, created to accompany a museum exhibit, plunges you into Shakespeare’s working world with reproductions of costumes, stage sets, playbills, and folios. Drama enthusiasts will enjoy comparing photos of Lady Macbeth in various incarnations, or the many actors to portray Hamlet.

But Schoenbaum’s scholarship doesn’t stop at the theater doors. He has “cheerfully ransacked the best books available” to bring the remote Elizabethan age to vivid life for us. You can admire period examples of needlework or peruse the 17th-century equivalent of wanted posters. Stylized wood cuts and engravings depict flora, fauna, and commonplace activities such as fishing and card playing; hand-lettered maps feature insets of nobles, gentry, and country folk in typical dress. Other illustrations let you peek inside a catechism class, a print shop, and a glove maker’s (a venue familiar to the Bard, whose father made gloves).

The volume is peppered with anecdotes about celebrities of the era, from “swarthy swaggerer” Sir Walter Ralegh (“proud, overbearing, and of a cruel heart”) to King James, who reportedly never washed his hands. On the grisly side, you can read up on the bubonic plague that swept through the capital in 1593, or the 1587 beheading of Mary, Queen of Scots (the executioner thought he was displaying aloft her severed head, when in fact he had seized her wig). The author speculates that a young Will, newly arrived in London, might well have witnessed this scene.

If you needed a reason to get excited about Shakespeare, this book may be it. The richly detailed context lets you step back in time to visit with the literary giant who “posthumously forged the creative consciousness of Western man.”