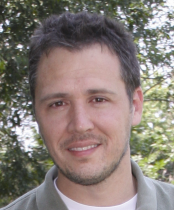 Somewhere in the shadowy landscape between The Far Side and Sesame Street lurks cartoonist Scott Hilburn, creator of The Argyle Sweater, reporting back to us on the voyeuristic tendencies of Mary’s little lamb, how dogs choose real estate, and Snoopy’s trade secret. Argyle never looked so good.

Unofficial Book Reviewer: What did you do before you became a cartoonist?
Scott Hilburn: I worked as a Flash developer for a telecommunications company. I was pretty good at the artistic side. The coding, not so much.

UBR: You must hear a lot of comparisons between your work and The Far Side.
SH: I do. The Far Side certainly influenced my humor and tone, but I think Argyle is its own creature, especially when it comes to subject matter. Where Larson’s gags were largely built around science themes, mine revolve more around history and pop culture as well as animals. And although I appreciate the comparisons, I have to acknowledge that there can never be another Far Side.

UBR: Is it harder to draw a strip where you have to come up with a new situation every day than one that has recurring characters?
SH: To me, it’s easier. The way I see it, I’m not confined to certain characters, settings, or personalities—I can go anywhere and do anything.

UBR: Any trouble with the censors?
SH: All the time. For a month or so I had one major metro paper running a replacement cartoon an average of once a week. And I’ve got tons of panels that my own editors have turned down. I’m considering putting together a book of my rejected cartoons.