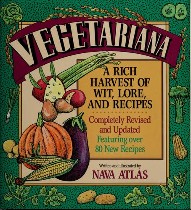 As a vegetarian, I often get asked to recommend a cookbook for friends who would like to try meatless dishes. For years I had to tell people that my favorite was out of print; now, happily, it’s available once again.

Even if you never make a single one of the recipes in Vegetariana, you’ll get a lot of enjoyment out of leafing through the book. Atlas combines her own whimsical drawings with folklore, literary quotes, and tidbits about prominent vegetarians such as George Bernard Shaw. Nearly all the dishes use common ingredients and are simple to prepare, from eggplant-ricotta sandwiches to stir-fried Buddha’s Delight. There are recommendations for entire menus, suggested uses for herbs, and a chart on cooking grains.

While your broccoli and mushroom soup simmers on the stove, read about the origins of pasta, the fabled aphrodisiac properties of asparagus, and the symbolism of pineapples in colonial architecture. And don’t miss G.K. Chesterton’s hilarious ode to the vegetarian merits of port and sherry.

My favorite of the culled quotes comes from Robert Louis Stevenson, who wrote in Treasure Island, “Many’s the long night I’ve dreamed of cheese—toasted, mostly.”