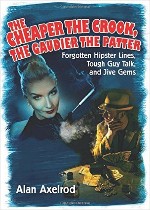 Alan Axelrod •
The Cheaper the Crook, the Gaudier the Patter •

You don’t have to read beyond the introduction to know what makes this book special. The author begins by telling the story of Brigadier General Anthony McAuliffe, whose response to a German demand for surrender at the Battle of the Bulge was a scribbled “Nuts!”

Two hundred pages later, after steeping yourself in the linguistic flavor of that era, you will have at your fingertips the jazziest, hippest, most colorful turns of phrase imaginable, not to mention a ready supply of one-liners.

I was particularly intrigued to learn about the Jody call, a cadence count used by marching soldiers to keep in sync. While the recruit goes off to war, the mythical Jody stays behind enjoying all the perks of civilian life, eating Mom’s home cooking, making time with the soldier’s girl. The call continues with a litany of army woes, such as “The best you’ll get in a biv-ou-ac / Is a whiff of cologne from a passing WAC.”

Did you recognize the book’s title? Credit it to Dashiell Hammett, author of The Maltese Falcon. And in the 1941 film noir classic by the same name, Humphrey Bogart delivers the line to Elisha Cook Jr.

Out of the side of his mouth, of course.