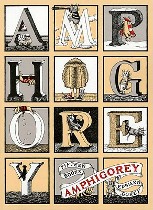 If you’ve seen the black-and-white graphics that open the PBS series Mystery!—a winking tombstone, bolts of lightning, a body disappearing headfirst into a lake—then you’re already familiar with the work of Edward Gorey. His stylized drawings evoke a macabre but captivating world of gaunt figures and sinister landscapes, with a sense of foreboding hanging over all.

Amphigorey brings together 15 short books written and illustrated by Gorey, some in verse, others in prose, and one told exclusively through pictures. Each story is set against a background of 19th-century propriety and stateliness, which is then infiltrated by disturbing elements. “The Doubtful Guest” chronicles the bizarre behavior of an anteater dressed in sneakers—eating plates, hiding bath towels, sleepwalking. At least it appears to be an anteater; its species, like much else, is doubtful. Worst of all, “It came seventeen years ago—and to this day / It has shown no intention of going away.”

Wraithlike black-gowned women glide through gloomy rooms of immense proportions; emaciated children succumb to a range of dire fates, particularly the 26 youngsters representing the letters of the alphabet in “The Gashlycrumb Tinies” (“G is for George smothered under a rug / H is for Hector done in by a thug”).

“The Willowdale Handcar” follows three Victorians as they travel through Peevish Gorge, Hiccupboro, and Bogus Corners. They depart on a whim and vanish without a trace, leaving behind only a gold ring inscribed DMG (for “Don’t move, Gertrude”). And how can anyone resist a story that begins “It was already Thursday, but his lordship’s artificial limb could not be found”?

Their pervasive air of doom makes these tales best suited for melancholy moods or Halloween. Unless desolation is your natural milieu, in which case they’re likely to leave you quite cheerful.