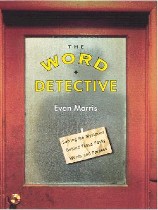 Books about word origins are one of my weaknesses; my shelves are stuffed with them. So it’s a special pleasure to come across one that’s beautifully written and hilarious to boot.

The intro alone is more fun than many entire books. Morris recalls his childhood excitement at the envelopes brought by the mailman every day containing “shiny dimes”—payment for his father’s vocabulary pamphlets. Being enthralled with dimes led to being enthralled with words; when the senior Morris, a distinguished lexicographer, retired, his son assumed the mantle of Word Detective.

The entries are culled from his newspaper column, where readers pose questions about terms that pique their interest: kangaroo court, jumbi, gone for a Burton. The story of blizzard finds Morris trapped indoors during an Ohio snowstorm, speculating that the coyotes circling the house are after his grilled cheese sandwich.

Every page sparkles with fresh, personal observations on usage, history, and the obstreperous marvel that is English. Sidebars fall under piquant heads such as “Some Dunce in a Ritzy Cardigan Ate My Graham Cracker.” And the author doesn’t fall into the trap of accepting a theory just because it’s tempting to believe; he’s done a thorough job of investigating every turn of phrase he tackles.

Maybe I feel at home with Morris’s writing because his cultural references are the same set I grew up with. The entry on raising the bar begins, “Honestly, I don’t know what gets into you folks sometimes. Any fan of Davy Crockett knows that bar is simply a backwoods form of bear.” Elsewhere he mentions “a large, unnamed Midwestern city,” then adds, “Maybe they’ve gotten around to naming it by now.”

The Word Detective is my kind of guy.