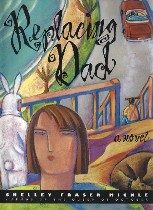 I’ve never been either a 15-year-old boy or the mother of one, but there’s no mistaking the authenticity of these two voices in Replacing Dad. In alternating chapters, Drew and Linda Marsh describe how they cope after their father/husband has left for a younger woman.

The lemonade the Marshes concoct from their lemon-strewed life has a flavor all its own. Linda does her June Cleaver imitation, baking brownies and singing “Don’t Worry, Be Happy” to mask her despair. Drew may be failing every subject in high school, but he’s nothing short of brilliant at improvising practical solutions. On getting his learner’s permit to drive, Drew props a CPR dummy in the front seat to stand in for the adult who is supposed to accompany him.

Four-year-old George the Second has taken to wearing his Halloween bunny costume every day, with barrettes (which he believes will keep him afloat) and a purse (no reason given), making him look like “a sexually confused rabbit.” Told that he asks more questions than Socrates, George responds, “Socrates is an old fart.”

The rescue dog they name Rambona (she was supposed to be a he) snarls and bares her teeth at everyone who comes to the door—including the ex-husband and his new wife. This secretly pleases Linda, who is too polite to do her own growling. Saying grace before dinner, the whole family prays that God will set fire to the underwear of the repairman who left their roof leaking. “Like that burning bush You did,” George contributes helpfully.

Algonquin Books of Chapel Hill has launched so many terrific authors over the years—John Welter, Abigail Thomas, and Kaye Gibbons among them—that the imprint alone is a guarantee of quality. Shelley Fraser Mickle is yet another thoroughbred from the Algonquin stable.