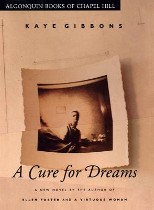 Kaye Gibbons •
A Cure for Dreams •

Kaye Gibbons’s work has been described as “lyrical and lightning-keen” (Los Angeles Times), “a celebration of the spoken word” (San Francisco Review of Books), and “vivid . . . compelling . . . arresting” (Boston Globe).

A Cure for Dreams is written as the continuous story a mother tells her daughter about life in rural Kentucky and Virginia, in language as natural as if she were pointing out photos in a family album. Here I am with my tongue swollen and dark from pellagra. Here are the bruises on your grandmother’s hands after her ma whacked them with a piece of stove wood because she “took a sport” who wasn’t Catholic. Here’s my ornery father dressed in his “Sundayest clothes” just before he walked into the river and stuck his head between two boulders.

The narrator, after watching her parents’ marriage disintegrate, determines that her own will be better. One day she asks, “How can you look at your friends and tell if they’re loved right?”

Her mother answers: “Listen and hear what the men call their wives when they come to the store to fetch them. Old squaw. This sounds bad but it’s truly sweet. Dear and Honey. I wouldn’t trust these. . . . Rarely though will you hear a woman called from the store by her name, which is best. So listen for each time Richard Bethune comes to the door and calls, Amanda! so nicely. And see how she gladly goes to him. A woman’s name will always suffice, but if you’ll keep your ears open in a room with men and women, you’ll hear it’s the call used least often.”

Gibbons has kept her ears open, and her stories bear the ring of authenticity because of it.