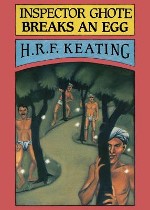 Ganesh Ghote (GO-tay), of the Bombay CID, has to tread carefully when questioning a prominent politician about the death of his wife—so carefully that the police superintendent insists on Ghote’s disguising himself as a vendor of chicken feed. Few props could prove more cumbersome than a dozen huge fresh eggs packed in grease and transported on the back of an ancient bicycle, over rutted roads, in monsoon season. But when Inspector Ghote finally breaks one, it cracks the case as well.

Readers looking for the shoot-’em-up action of a Western thriller are in for culture shock: This is India. There is protocol to be observed, tradition to be upheld, palms to be greased. The entire book is a treatise—albeit a witty one—on the difficulty of carrying out one’s duties in a society that thrives on paradox.

But Ghote, whose low-key demeanor invites comparison to TV’s Columbo, is the perfect man for the job. In this sixth installment of the series, he interrogates a hallucinating dipsomaniac, clashes with a fasting swami, and eludes a mob of protesters whose banner reads GHOTE GO. He not only persists through every obstacle, but stands up to his superiors even at the risk of losing his job.

Keating’s scenes put you straight into the swirling hubbub of Indian life—temples and tongas, baksheesh and bureaucracy, dhotis and DTs. The story abounds in tangled kinship, impossible phone connections, and worse lodgings, as well as dialogue that perfectly captures local speech patterns (“Do you not know the way my mother’s cousin’s aunt is dying long ago?”). And the crime’s solution comes from the least likely source of all.

Ghote plods on through a total of 24 mysteries—plenty of room to savor the subcontinent in all its splendor, contradiction, and diversity.