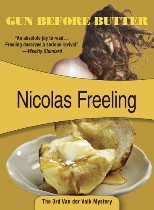 Freeling is yet another fine mystery writer whose work has largely faded from view in recent years. The best known of his books feature Piet Van der Valk, an inspector with the Amsterdam police whose maverick tendencies and unconventional approach keep him from being promoted. (His French wife, Arlette—another drawback in the official view—does a lot of snorting about this.) He has a bawdy sense of humor and drives a deux chevaux when he doesn’t ride the commuter train to work.

Van der Valk’s cases take him down canals, into whorehouses, and occasionally across borders into neighboring countries. Gun Before Butter, Freeling’s third novel, centers around dual identity and commodity smuggling in the European market. Its heroine, Lucienne, is a free spirit somehow akin to Van der Valk who chafes against a straitlaced society; Dutch mevrouws in particular come off as puritanical, gossipy busybodies obsessed with cleanliness. There is a recurring motif from Shakespeare, a lot of drinking being done, and a May-December romance with a tragic outcome, as well as an overview of 1960s Amsterdam and the people who inhabited it.

Freeling excels at the psychology of crime—what might lead one human being to take the life of another—and his stories examine the minds and motives of both detectives and criminals. Legend has it that Freeling got his inspiration for the character of Van der Valk while serving time in prison himself; if that’s true, it was a profitable incarceration.