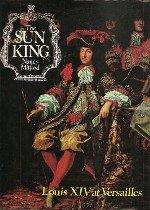 There’s a juicy intrigue born every minute in the court of Louis XIV, France’s Sun King. Rumors fly up and down the marble staircases at Versailles. Annoying women get spirited off to convents; inconvenient husbands get poisoned. Everybody cheats at cards. It’s Facebook on steroids . . . circa 1680.

And who better to dish the dirt on the French aristocracy than Nancy Mitford, lifelong francophile and gossip extraordinaire? The opening pages alone promise a captivating ride: When Nicolas Fouquet invites 6,000 people to meet the king at a housewarming, Mitford tells us, Louis returns his hospitality by putting him in jail. “We seldom hear of other people giving parties for the King.”

(This isn’t the Louis who got guillotined, by the way: Louis XIV died in bed at age 76, and was widely mourned.)

An outdoorsman at heart, the king would rather be riding or hunting than doing anything else. Well, almost anything. His three primary mistresses—chosen for their ability to amuse him as well as their comeliness—vie with one another for his favor, while spitting out a passel of illegitimate offspring. Louis, never a patient man, will frequently bed a chambermaid if his preferred paramour keeps him waiting too long outside her room.

The royal physician, fearful of drafts, goes around with “a bit of garlic in his mouth, incense in his ears and a stalk of rue sticking out of each nostril.” During exceptionally long Lenten sermons, ladies of the court attend chapel with chamber pots concealed under their voluminous skirts. Louis’s brother, somewhat overwhelmed by his “great blonde Teutonic tomboy” of a second wife, succeeds in fathering their children “by dint of hanging holy medals in a certain place, rather impeding any pleasure Madame might have felt.”

Click here to read a review of The Pursuit of Love by Nancy Mitford.